Heart us on Insta

You have Successfully Subscribed! 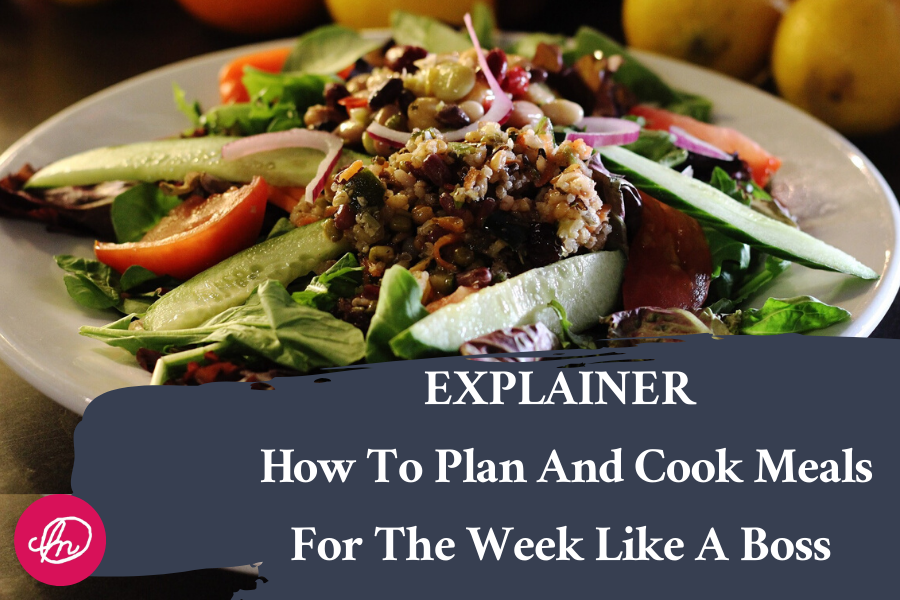 If you’re like me, your parents worked hard, and long hours. It means that the bills were paid. You had a roof over your head. But no one is super human and not everyone can do everything. So cooking wasn’t always something that happened in your home. Food was something that appeared from takeout, an instant packet mix, or the freezer. So, in the end, you never learned to cook.

Sure, you can maybe boil and egg or make pancakes.

But that isn’t the same as having healthy and delicious breakfast, lunch and dinner at home each day of the week. There are heaps of skills to manage and cook food for the week that we just… never learned.

And while we’re in the modern era of UberEats and we don’t need to learn to cook, the problem is that you blow thousands of dollars by ordering in, instead of cooking yourself at home (on top of it just being super unhealthy most of the time.)

Compare the two: if you need dinner for a week, to order it in, you need to spend at least $140 (because there’s a minimum spend, right?). If you cook at home yourself, you could cook a week of dinners for just $7.

When we look at that across the year, that’s spending over $7000 a year on takeout, as opposed to just over $300. I know I would prefer to use my money on something way more interesting than takeout (yes, holidays and massages – but an emergency fund so I can quit that job I hate is number one for me, right?).

So, I’m going to break down the things I’ve learned over the last few years about the skills I needed to learn in order to go from “takeout” to “I’m going to try it out!”

The first tip I’m going to start is a pretty broad one. Know your schedule.

At the peak of my ‘takeout’ days, I worked in an office that I left at 6pm, I got home at 7pm, and I was han-gry. I would call my partner on the phone on the train on the way home and we would fight because I wanted him to order food so it would be there when I get home; but he refused because he through it was easier to do when we were there together. So food wouldn’t arrive til 8pm, and I was ready to murder more than just the curry that had arrived.

With the glory of hindsight, I realise that I had a few more options. I could have:

Get down to your level

Because all I ordered in was curries, it was basically the only food I knew that I liked. Remember, my parents had never really cooked at home, or when they did, it was boiled vegetables which were mostly mush.

Several times in my “takeout years” I was inspired to ty to cook a curry. I spent the entire day shopping, cooking and freezing the giant curry I’d cooked. And you know what? It was pretty gross. I forced myself to eat it because I’d put so much effort in.

I was cooking something that was way above my skill level. The food came out burned, or I didn’t have the right ingredients or the right equipment. And the biggest problem was that my confidence plummeted. So I stopped trying for many years.

The solution that worked for me? Find easy recipes. It sounds so obvious in hindsight, but it took me a decade to learn.

Some rules that helped me when perusing cooking websites where to select from recipes that had:

This is literally a search filter on many cooking sites.

I bookmarked several that I wanted to try. And the meals were simple. Things like rice, broccoli and soy sauce. Pasta and mushrooms. Hokkien noodles and tofu. Simple, healthy, delicious.

But you know what happened? My confidence blossomed. Small meal, by small meal, I got better. I believed it was a thing I could learn and get better at.

It used to be about an 80% chance the food I would cook would come out inedible. Now, about a 10% chance. And I can now cook the curries that used to stump me.

It was a massive shift for me to accept that I was a beginner, so needed to start with beginner recipes.

I’ve created a Pinterest board of recipes that has less than 6 ingredients to give you some ideas to get started.

Don’t wait until you’re about to leave for the shops to do this – you’ll be thinking about a million other things and will repeat the same mistakes of not planning, buying things you don’t need and creating meals that are too difficult.

“Meal planning” is a phrase which makes me feel like a Stepford Wife. But hear me out. Meal planning is just knowing when you can shop, and how much food you will have before it goes bad. Think of it as ‘planning your resources’ in The Hunger Games.

At it’s simplest, on the weekend, you could cook a giant stirfry and freeze seven portions, so every night, you’ve got a meal in the freezer for every night of the week. Meals. planned.

You could mix it up based on your life:

The point is, that you need to think about the week ahead.

Some things to consider:

Meal planning really doesn’t need to be anything fancy. But just being aware of what you’ve got coming up, means you know how to plan for it.

For example, in this schedule, there are two nights a week we’ve got other things on, so we only need to cook two meals that week fresh, and eat a pre-made frozen meal the other nights. 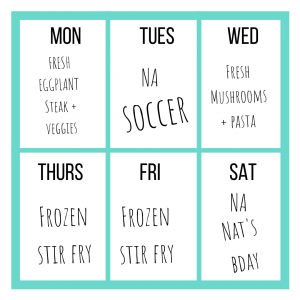 Now, some people hate structure, so this might not work for them. But I encourage you to at least try it out. It makes life way easier when you’ve already made the decisions ahead of time and bought the food.

You need a shopping list. Don’t go to the supermarket without one. That’s how they get you to buy a million things you don’t need, that will rot in the bottom of your fridge (I think back to so, so much wasted money in my life buying lettuce that rotted in the bottom of my fridge).

Here’s the other benefit of meal planning: you know exactly what you need to put on on your shopping list.

For the meal plan example above, we’ve got just three meals to prepare, so our shopping list would be:

See how we were clever and used the same ingredients from the other meals across the stir fry? That’s right. Smart use of resources, Katniss.

You can be in and out of the supermarket in ten minutes with a list like this. No wasting money or food.

Pro tip: Keep an empty shopping list somewhere handy, like on a bench, or the fridge. When you run out of something you might not usually think of (like soy sauce), write it on the list then and there, so you know that going to the shops at the end of the week, those sneaky items aren’t lost.

Get to know your pantry or freezer. Keep it stocked with the staples you eat a lot so you’ve always got a back up when things get tough.

Don’t let your pantry become like that closet you never organise. No one wants – or needs – fifteen cinnamon shakers (I speak from very real experience here). Keep it clean. Love it.

It also helps to see what you’ve already got in your pantry before you go shopping to avoid duplicates.

Get to know your supermarket. Learn where the veggies are. Learn what’s in the aisles. The more familiar you become, it’s easier to get in and out of the supermarket quickly, with only what you need.

You also save money, because you skip the aisles you don’t need things from and won’t be lured to buy stuff (read: cookies) that you don’t need. They ain’t on your list.

Carrying that jar of nuts will also help in this scenario to help quell that hunger beast!

You actually need basic cooking equipment. A saucepan. A frypan. A knife. A chopping board. A strainer. You can’t make real food without the equipment to prepare things properly.

It does not need to be the top of the line – you just need to own something. You can upgrade over time as your skills increase.

Every major supermarket now has a cooking equipment section. The fifteen dollars you spend of a knife will pay off in a single meal if you cook instead of order in.

These skills are all things that I could see my friends had learned from their family growing up. They were skills I did not learn, and had to learn on my own.

The big lessons that made a difference for me were:

Yes, this stuff takes time. You might spend half an hour planning your meals for the week – but remember the bigger picture: you’re saving $7000 over a single year by doing this. You’re eating healthier. And, you’re learning a sick new skill to impress future partners. Nice.

Learning to cook has been a game-changer for me in terms of having a creating outlet, saving money and keeping a healthy weight.

I know that not everyone learned this growing up, but as they say ‘the best day to plant a tree was a decade ago, the second-best day is today.’ Maybe you didn’t learn as a teenager. But there’s no reason you can’t start today. Get to it.

Check out our Pinterest board or a recipe site. Find three recipes you’d like to try on the weekend.

Subscribed! See you in your inbox!